An Unbeknownst Yet Righteous Business in Rail Scale Systems

When we think of mining, farming, and other industrial sectors, we don't often think of certain intricacies behind the the business, such as how grain is weighed and transported from its source to the place where it's used. 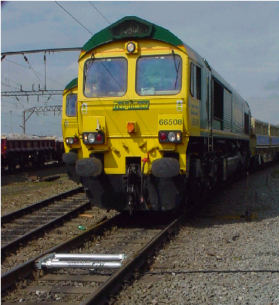 In this article we touch upon this commonly unbeknownst yet righteous business in rail scale systems and transport technology.

These rail scales are an integral component to weighing payloads in a wide variety of industries and are heavily relied upon for efficient business operations.

Each weighbridge has heavy duty sensors that provide information and accurate data for incoming and outgoing loads. A typical rail scale is multipurpose because it can be used in industries, agriculture, surface mining and recycling plants.

In-motion rail scales use state-of-the art technologies and advanced features to weigh passing trains. They are capable in measuring the exact tonnage of cargoes from farm produce, mining and industries being carried by the train based on the payload weight. The scales are installed on the main line of the railroad track. An in-motion rail scale has the ability to pinpoint a particular railroad spot where the train passes by at a particular speed and then measures the ton capacity according to the force that is reflected to the railroad spot.

In-motion rail scales weighs the distance coverage of the train each time it passes on the selected cart ends which are more precise that the former type. The scales are proven to be efficient in weighing the payload weight of cargoes on each train cart. It gives precise and accurate measurement and signals if there is an overload which can be of help to avoid being penalized.

They have the ability to control, monitor and manage the even distribution of contents carried by the rail car in such a way that the operation is smooth and efficient. Installing the in-motion train scale can be done in 30 minutes and it reduces time spent for welding, drilling and cutting of the rails.

Axle rail scales are a static type of rail scale system that are used for motionless trains to measure the weights of the rail car. They give accurate measurements for all products from the metal and steel industries before they are transported by the rail car. They monitor and determine incoming trains carrying tons of scrap metals and similar products each time they arrive at the profit centers.

Axle rail scale systems are most advanced rail scales because they work together with a host computer to ensure that the rail cars are balance in carrying those heavy metal and steel products.

Most rail scale systems are designed to meet international weighing standards set by professional organizations and corporations worldwide. They have the ability to control, monitor and collect payload data of trains in an highly efficient manner, based on the technology used.
Posted by Tyler Tafelsky at 7:14 AM